The Tokyo Olympics will be like no other since the games started, with a very limited attendance being able to attend the games due to the pandemic. However, on Friday Japan showed that they won’t let the lack of fans and current world affairs spoil the event as they put on an incredible opening ceremony including a drone display in the night sky that resembled a moon. Since then we have seen shock wins, new events shown for the first time and world records being broken. Its set to be an Olympics to remember.

A brief history of the Olympics:

A major talking point of the games is the stadiums and locations used for the events. Since the start we have seen iconic stadiums built specifically for the Olympics like the Los Angeles Memorial coliseum, the Olympiastadion in Berlin and the London Aquatics Centre. Japan have built numerous stadiums for the Tokyo Olympics this year, however, they also have legacy sites which are locations that are being reused after they held the Olympics back in 1964. One of the sites that is returning is the ‘Enoshima Yacht Harbour’ which will be used for the sailing. 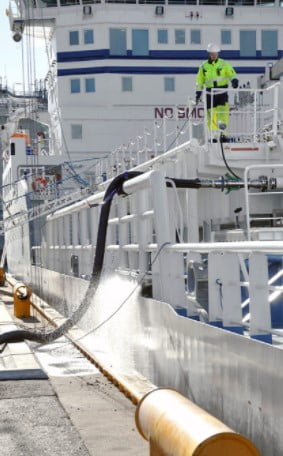 Away from the Olympics, harbours and ports play a very different role. They contribute nearly £1.4 billion each year to the UK economy as 95% of imports and exports pass through them.

Here at EWFM we support ships that use ports and similar locations all over the world by supplying them with products that keep their industries flowing. Our products that could help your company include:

Our Swivel Joints are used as part of Marine Loading Arms to help fuel your ship, part of hose reel systems to allow them to rotate for onloading or offloading various products, onboard ship cleaning systems and more.

These are used to create a quick connection to the ship for loading Fuel, Cryogenics and chemicals.

When fuelling or loading, ships float around and can drift.  In the event of a pull away incident breakaways prevent damage to the line.  They are the first part of the line to break saving costly damage to plant.  With valves in both sides they prevent spillage which can be both dangerous and costly.

The Tokyo Olympics is well underway with Great Britain winning more gold each day! At EWFM we hope to continue providing a gold standard service to our customers in ports and other industries around the world.

Site visits are also available to discuss the best solution for you when required, so if you would like to see how we can support your business then get in touch with Guy and Mike in our Sales Team to discuss your requirement and they will be delighted to help, wherever you are in the world.